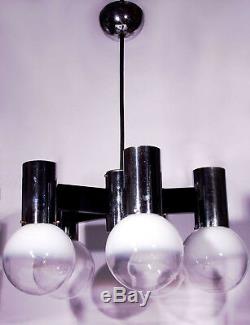 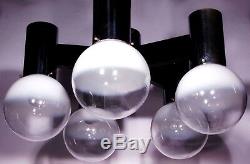 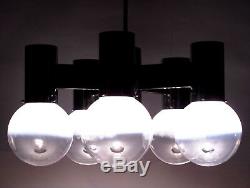 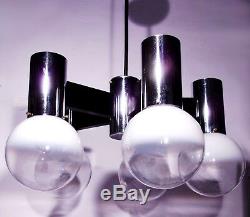 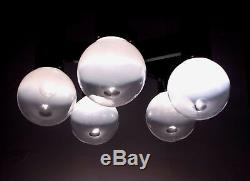 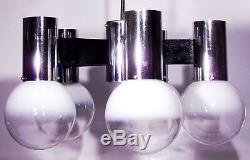 Original Vintage Space Age Chandelier Attributed to Gaetano Sciolari for Mazzega, circa 1960, Italy. 5x Murano Handblown Clear and Opaque White Art Glass. Beautiful Italian vintage Space Age chandelier attributed to the designer Gaetano Sciolari for Mazzega, having five clear and opaque white handblown Murano glass shades on a chrome and wood frame. Chandelier in excellent vintage condition, very well preserved, with minor wear and tear consistent with age and use, without damages (none of the glasses is chipped or cracked), checked and in working order. Place of Origin: Italy Maker: A.

50 cm Total H eight: adjustable max. 1 0 0 cm Number of lights: 5 -Light Bulb / E 14 Sockets (B ulbs not I ncluded). You must return an item in the same condition as it was received, not altered in any way. As with any vintage electrical item the Chandelier need to be checked by a competent electrician before use. Gaetano Sciolari is an Italian designer and entrepreneur. He has made a considerable contribution to the success of the Italian design around the world and in particular in the United States. The lighting designs of Italian entrepreneur-designer Gaetano Sciolari have recently come back into the spotlight, particularly as glamorous 1970s pieces have attracted a new generation of admirers. Sciolari was born in 1927.

After graduating with a degree in architecture, he began training as a film director. In the postwar era, many Italian design companies, Stilnovo in particular, were attracting international acclaim for their experimentation with new materials and streamlined silhouettes.

In the mid-to-late-1960s, Sciolari's designs for his own manufacturing company began to take off with high-end interior designers in Europe and the US. This body of work was influenced by a range of art movements, from Cubism and Deconstructivism, to Minimalism, but always exhibited a sophisticated, sculptural, and even futuristic interpretation.

He utilized crystal and ice glass while juxtaposing highly polished metals against satin finishes, including the unconventional combination of brass with chrome. During the 1970s, Sciolari Lighting imported lamps to America via Lightolier & Progress Lighting, which featured many Sciolari collections in annual catalogues, including Sciolari's Geometric Series, Habitat Series, Scultura Series, and Futura Series (specific design dates unknown). The result was massive sales and a successful expansion of the family business. Many argue that Sciolari produced his best work in the 1970s, when design tastes began to shift away from strict modernism in favor of more crafted and decorative aesthetics alongside Art Deco and "space age" stylinga similar trend can be seen in the work of , Paul Evans, Francois Monnet, and Verner Panton. Sciolaris Cubic Series, which was realized in a variety of sizes, configurations, and finishes, is Sciolaris most well known design form these years; it appeared in many TV shows in the 1970s and'80s.

Notably, Sciolari was the founder and first president of the trade association of Italian manufacturers of lighting fixtures. Sciolari passed away in 1994.

Today, his lamps, pendants, and chandeliers fetch high prices and are highly-sought after by collectors. The AV Mazzega studio was founded in Murano by Angelo Vittorio Mazzega in 1946, taking with him centuries of experience in the art of handmade glass making. During the 1950s his son, Gianni Bruno Mazzega began working at the factory to help further its traditions and influence and production of handmade glass lighting items and custom-made furnishings began in 1960. The AV Mazzega studio eventually began to merge lighting design into the studios glass concepts, which was also one of the reasons why the company began to have a very huge impact on the Italian Design world. Mazzegas contributions to glass art and lighting design have made their studio synonymous with Murano glass history.

Milan was at the center of this tremendous creative energy and was the venue of choice for defining events like the Milan Triennale exhibitions and later on the Salone del Mobile. Italy was able to merge art with design and craftsmanship with industry in a way nobody had done before. This occurred thanks to a very peculiar industrial network where larger companies would often work hand in hand with architects, artists and family size enterprises located in the same industrial districts. In the 50s George Nelson identified three currents in modern design: the biomorphic, the machine look and the handcrafted look but none of these could fully describe Italian design as it was so diverse that it could not fit in a single category.

In a way, it was already at that time postmodern. On one hand you had "Rationalist" designers such as Franco Albini who focused on function and on the other you had architects and designer such as Gio' Ponti, Ico Parisi and Piero Fornasetti who added to functional pieces a poetic interpretation and dynamism. In 1950's industrial objects became a symbol of this new renaissance period; Italy suddenly found out that modernity means welfare, comfort and a best type quality of life. So next to home appliances we could find furniture, lamps, a vaste range of objects for home and free time, radio sets and television sets that gave life to a typical 50's gay image.

Shapes became less flamboyant in the mainstream design but remained very vivid in the work of designers inspired by the pop art and plastic became a widely used material even for high end products. Some important names of the period to mention are Franco Albini, Ignazio Gardella, Luigi Caccia Dminioni, Vico Magistretti, Ettore Sottsass, Marco Zanuso, Achille and Piergiacomo Castiglioni and the BBPR group (Banfi, Belgiojoso, Peressutti, Rogers). The Italian design excitement and sperimentation found its peak in 60's, when a great number of ordinary objects were produced.

The item "Vintage Italian Chandelier Space Age Glass Globe Sixties Sputnik Design 60s 70s" is in sale since Monday, April 8, 2019. This item is in the category "Antiques\Periods & Styles\Mid-Century Modernism". The seller is "spatheia" and is located in Milano. This item can be shipped worldwide.