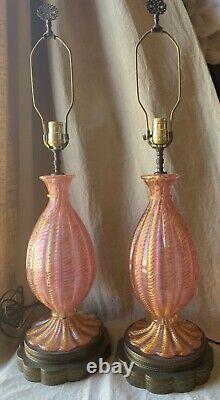 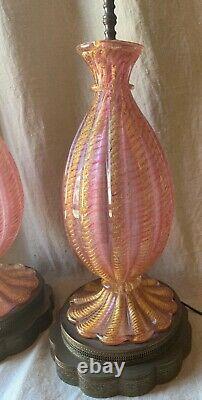 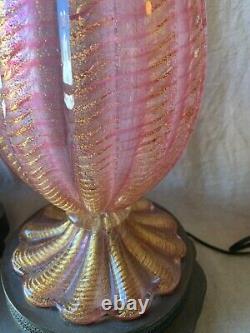 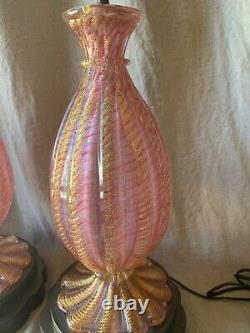 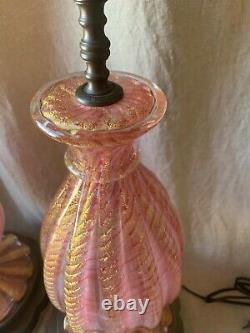 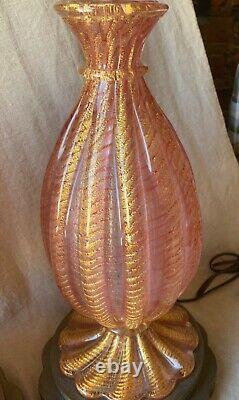 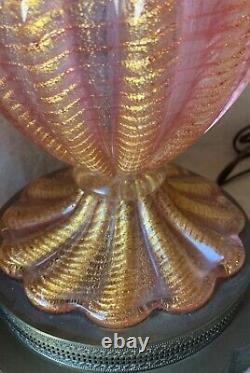 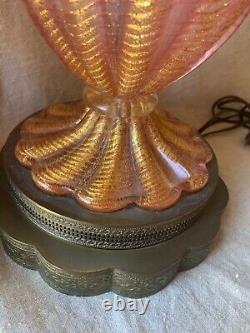 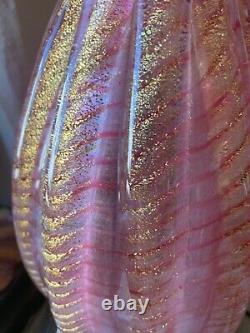 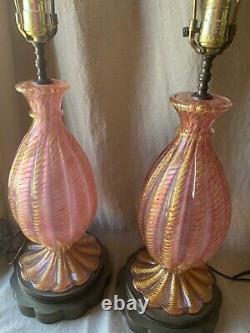 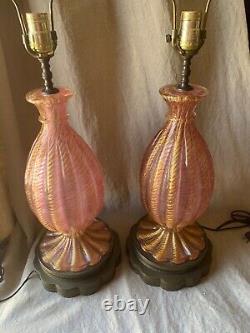 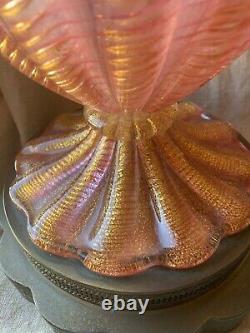 Nice proportions with elegant elongated body. These lamps is in perfect condition. The glass is excellent and undamaged.

The metal parts are in good shape, although there are a few discolored spots on the base. This part is easily replaced!

Exceptional and Massive Italian table lamps by Barovier & Toso of Murano. This is among the finest mid-century modern Venetian glass lighting / lamps I've offered. Hand blown in the Cordonato d'Oro (cords of gold) technique with a profuse amount of gold leaf aventurine within the glass. Extraordinary decorative Venetian art glass for your home, collection or gallery inventory! Overall height to top of finial: 32 1/4.

The origins of the Barovier & Toso glass factory can be traced back to 1878, when Benvenuto and Giuseppe Barovier founded the Barovier brothers. Shortly after, the glassworks took the name of Artisti Barovier, producing blown glassware of the classic type and Art Nouveau-inspired objects as in "Piume" and also using polychrome murrine and tessere. In 1914, the Artisti Barovier took part in the Flower Show at the Doge's Palace. During the First World War, the glass factory moved to Livorno, and upon its return to Murano in 1919, it took the name of Vetreria Artistica Barovier & C.

Headed by Ercole and Nicolò Barovier. The production of murrine vases intensifies, based on designs by Vittorio Zecchin and Wolf Ferrari; new "iron and glass" combinations are experimented with the collaboration of the firm Cardin & Fontana of Venice, presented in 1923 at the International Exhibition of Decorative Arts in Monza. In 1926 Ercole Barovier definitively took over the artistic direction of the company, inventing processing techniques that will contribute to the renewal of glass art and with an artistic production of over 20,000 models. The new technique of "hot coloring without fusion", which using very thick materials, with inclusions of various substances, causes polychrome reactions, leads to the creation of the "Primavera" glass, a limited series exhibited at the 1930 Biennale. Reused with various modifications, even in the 1950s.

In 1937, the glassworks participated in the Paris International Exposition, obtaining the Grand Prix. Ercole Barovier used thick colorless glass, enriching it with applications, inclusions and air bubbles. In 1938 the "Rostrati" were produced, glass with the surface characterized by large regular, degrading points. The "Bugnati", "Lenti", "Superbolle", which appeared in the following years, belong to this series. In 1936, the merger with S.

Ferro-Toso, taking the name of Ferro-Toso-Barovier, which was maintained until 1939, the year in which it changed to Barovier-Toso & C. In 1942, a new merger with the glassworks of Murano F. Lli Toso will bring to the current company name Barovier & Toso. In 1940, Barovier-Toso & C presented various works at the Milan Triennale, including: "Rugiada", "Groviglio", "Oriente" and "Rilievi aurati". The post-war production was characterized by rather simple forms, with the experimentation of new uses of traditional techniques, such as those on murrine, obtaining unprecedented chromatic effects.

At the Milan Triennale in 1951, the following vases were presented: "Corinto", "Damasco", "Millefili", "Sidone", "Parabolici", "Moreschi" and "a Spina". In the same year at the International Glass Exhibition in Paris: the "Barbarians", the "Eugenees", the "Neolithics" and the "Aborigines".

At the end of the 1950s, his son Angelo joined his father as a designer, to whom creations presented at the 1960 Biennale are due, such as the "Polivasi". In the 1960s, the glassworks resumed the murrine technique, proposing some new models: "Argo", "Dorici", and "Caccia", presented at the Venice Biennale in 1962. The "Siderei" and "Athena ", " Rotellati "and" Neomurrine ". From the 1980s Barovier & Toso availed itself of the collaboration of external designers such as Matteo Thun and Toni Zuccheri. The item "Pair Italian Murano Venetian CORDONATO D'ORO Glass Table Lamp Barovier Toso Vntg" is in sale since Tuesday, April 6, 2021.

This item is in the category "Pottery & Glass\Glass\Art Glass\Italian". The seller is "antikl0ver" and is located in Ridgewood, New York. This item can be shipped to United States, Canada.